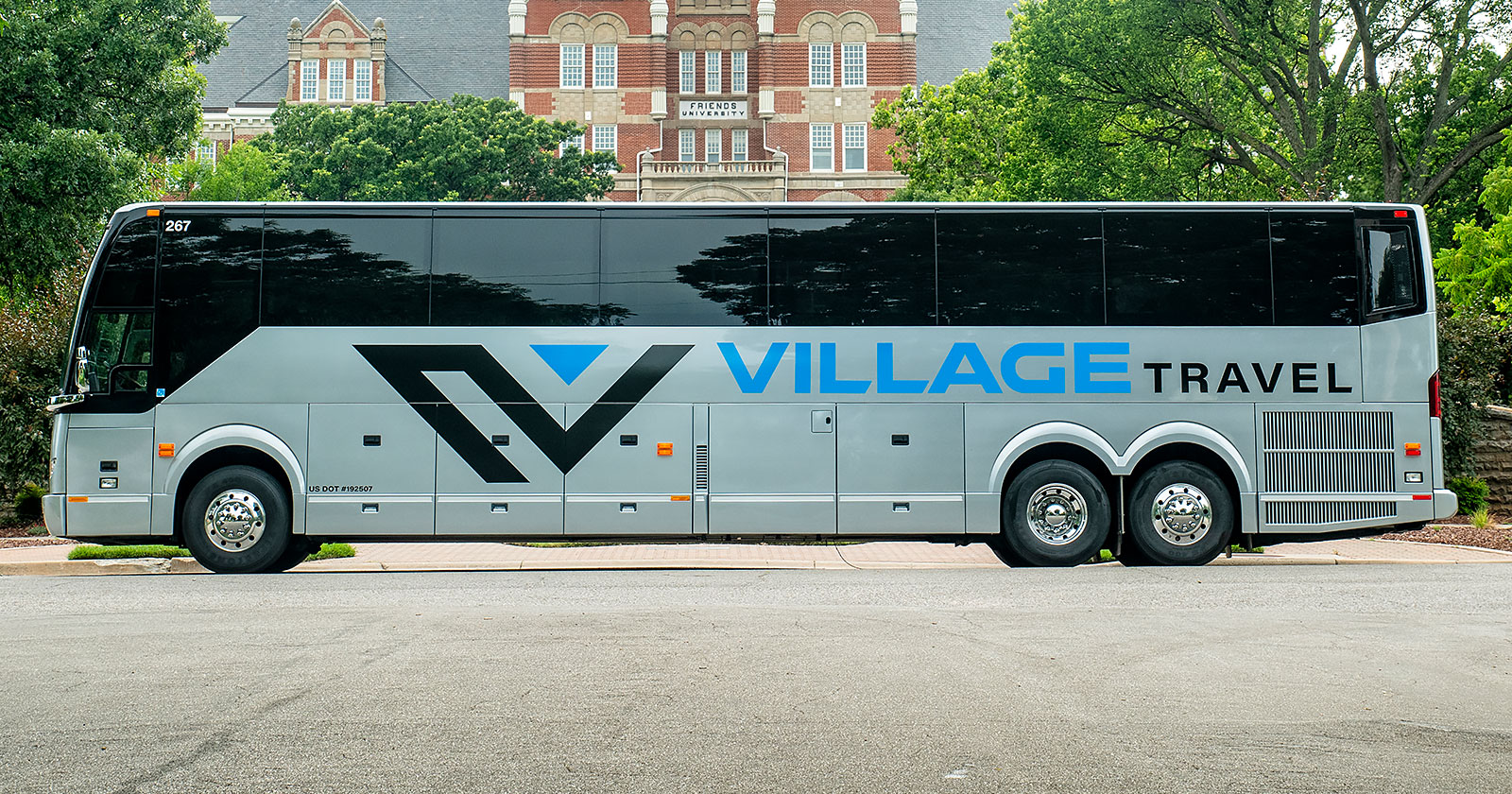 Village Travel was founded in 1980 in Wichita, Kansas. What originally started as a family-owned business with one motor coach has steadily grown to be one of the largest charter bus and tour companies in the Midwest. With offices in Wichita, Salina, Oklahoma City, Tulsa, Fort Smith, Springfield, and Springdale, Village Travel is a diversified company that operates over 100 charter coaches, plans over 220 tours annually, offers traditional travel agency services, and operates daily scheduled service with Greyhound through its Beeline Express division.

The Mission of Village Travel

Our mission is to provide clients with a fun, worry-free travel experience through exceptional standards in safety, customer service, and equipment. 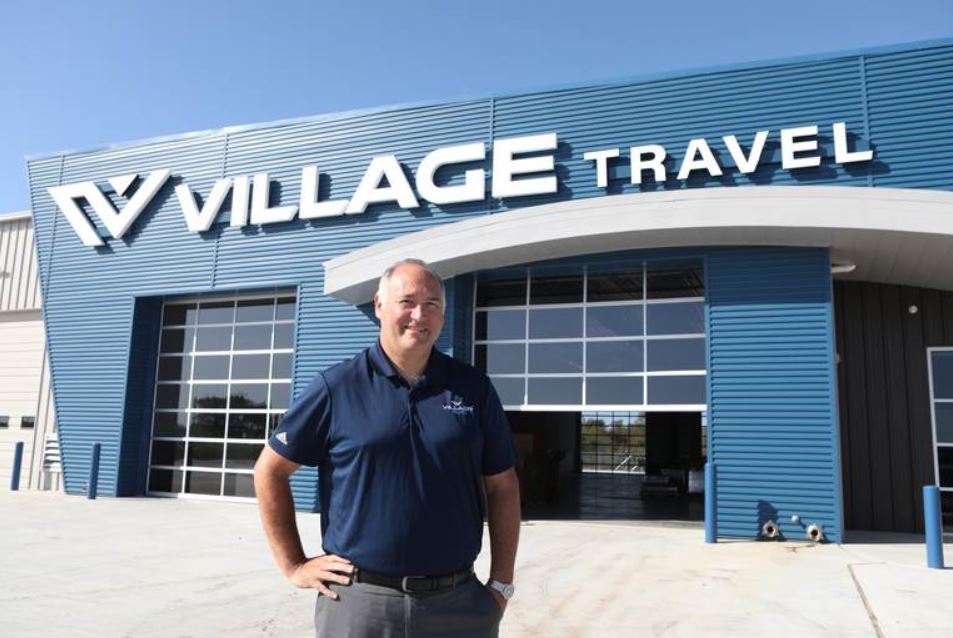 Article by the Wichita Eagle

Village Travel is moving into its new headquarters this week, which makes the fourth building the company has built over seven sites in almost four decades.

“We get better every time,” says president Jeff Arensdorf. “We’re learned a little bit every time, so this is kind of the best of everything.”

That’s up from the original 10 acres Village Travel acquired.

“We needed the dirt,” Arensdorf says.

He says he didn’t necessarily need more land but literally needed the dirt to elevate the 10-acre headquarters site by almost 6 feet to get out of the flood plain.

Arensdorf says Village Travel will benefit from the visibility K-96 offers and the ease of getting on and off of it compared to 21st Street where it is now.

There are other benefits with the move, such as tour customers no longer having to walk through the elements to depart.

“It’s a fully covered drive-through bay for our tour customers to unload their luggage,” Arensdorf says.

Village Travel’s current building has five bays with mechanic pits. The new building has 17 bays and the ability to lift buses in the air to work on them in addition to the pits.

Two of the bays will be for body shop work. The rest are for general maintenance.

Also with the new building, Village Travel will be able to park 52 coaches outside and 17 inside compared with only five inside now and 26 outside.

“When they’re all here, we’ve just been double parking them,” Arensdorf says.

When the company started in 1980 with office space at Twin Lakes, it offered ski tours. It added its first coach in 1981. In 1983, it added other tours and then moved to its current site in 1984.

“We maximized this place,” Arensdorf says.

At the new building, the company has room to add more office and shop space along with extra parking.

“All of our administration is centralized in Wichita, so as we’ve gotten bigger regionally, we’ve had to hire more people,” Arensdorf says. “That’s the biggest reason for building as big of a facility as we are.”

About this time last year, it also branched into the entertainer coach business. It uses 22 of its buses to transport entertainers and their bands and crews around the country and beyond.

“That’s a big deal,” Arensdorf says. “With that segment of the business, we compete nationally.”

He says that’s where the major growth potential is for the company as well.

Also, Arensdorf says there is a lot of consolidating going on in the tour bus industry right now as smaller companies sell.

“We’re a good prospective company to acquire them.”

With the move into its new space, Village Travel is completing a rebranding of its entire fleet.

Arensdorf says the company has been known by various names through the years as its business has grown and changed, such as Village Charters when it started and then Village Tours & Travel. Now it is simply Village Travel.

“It’s kind of fit in nicely with the new building,” Arensdorf says.

“Everybody’s really excited about it.”

The four acres, with a 20,000-square-foot building, are attracting attention from a lot of potential users and developers “because it’s so well located at 21st and Tyler,” Saville says.

“It’s pretty rare to find . . . that much land available at that location,” Saville says.

“There’s just a wide variety of uses that could work there.” 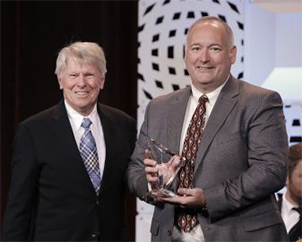 Village Tours & Charters, one of the largest charter coach and tour companies in the Midwest, is honored by its industry peers with the United Motorcoach Association’s Vision Award for large fleet operators, March 1, at the organization’s annual convention, the Motorcoach Expo in St. Louis. The vision award is the association’s highest honor, and there are two winners each year, one for a fleet of 15 or more motorcoaches and one for companies with fleets of 14 or fewer vehicles.

Watch the VideoView the Press Release 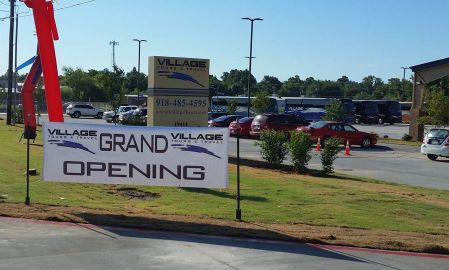 Village is excited to announce the opening of our new terminal in Tulsa. The first tour departed from the new office on June 27, with grand opening festivities held from June 28-29. In addition to office and maintenance space, the new terminal features a Departure Center where tour customers can check-in and relax prior to leaving. We can now also offer a secure, lit parking lot for our patrons. This opening also improves our ability to provide the best charter service possible out of Tulsa and its surrounding area. 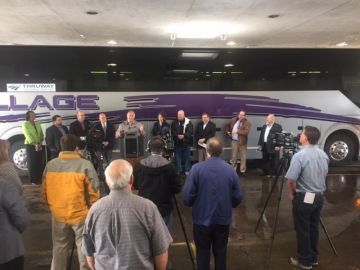 Village is pleased to announce its new daily bus shuttle service that will connect Wichita, KS, to Amtrak stations across the country and vice versa. Oklahoma City connects to the EAST / WEST Train in Newton. Newton connects to the SOUTHBOUND Train in Oklahoma City. Board the bus in Wichita to connect to the EAST / WEST Train or the SOUTHBOUND Train to hundreds of destinations. Call 1-800-872-7245 for information & tickets. Wichita has been without Amtrak service since 1979. 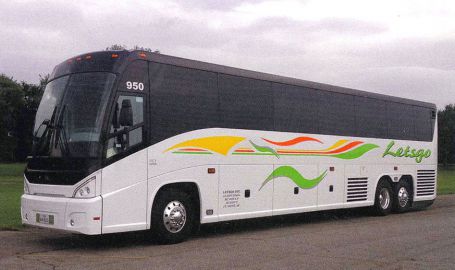 Village is pleased to announce the acquisition of Letsgo Charters based in Ft. Smith and Springdale, AR, on January 4. Letsgo Charters began operations in August of 2001 with two used MCI coaches based in Ft. Smith. The company grew and expanded to a fleet of 15 coaches. According to Village President Jeff Arensdorf, Letsgo has done a nice job growing that market with a good reputation. Growth into Northwest Arkansas is a natural fit for Village, since it is already doing a fair amount of business in the area. Village is excited about being able to serve this area with coaches from Tulsa in addition to Springdale and Ft. Smith. The Village fleet currently stands at 87 coaches and 240 employees.

Village relocates to a new maintenance facility in Salina. The building, located near the intersection of Crawford and Broadway, had been the home of Zeller Brakes since 1955. More than $200,000 was spent updating and remodeling the building to be able to handle parking, maintenance and washing of the Village fleet based there. Previously, Village was using the building formerly operated by Salina Charter Coach. The move to the new building further solidified Village’s commitment to Salina and northwest Kansas. 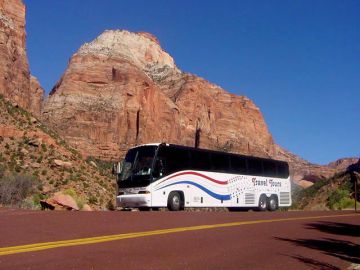 Village is pleased to announce growth into Tulsa and the surrounding area with the acquisition of Travel Tours. Based out of Wagoner, OK, Travel Tours began in 1979 with the purchase of a new Eagle motorcoach and grew to 12 Eagles in 1994. The company operates over thirty retail tours each year in addition to taking care of its charter business. Village will now offer tour departures out of Tulsa and will continue to provide charter service out of the same area.

Village completes a 1.3 million dollar facility upgrade at it’s Oklahoma City location. The upgrade includes a new parking lot that will accommodate up to 30 motorcoaches at any given time along with shop and wash bay additions. The need arose after Village’s acquisition of Time Lines back in Spring 2012. The construction took nearly one year to complete.

Village contracts to transport nearly 3,500 passengers from Kansas to California on what is its largest charter movement to date. Village uses 70 motorcoaches that traveled in excess of 478,000 miles. That’s one for the record books! 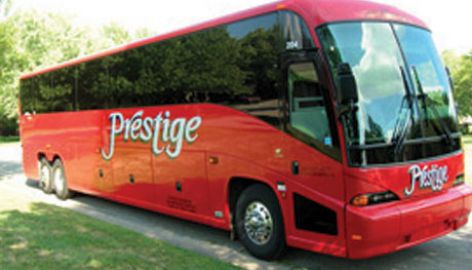 Village announces the acquisition of Prestige Charters on March 26. Both companies have a long history and are well-respected in Wichita. Prestige started with 2 motorcoaches in 1985 and grew to 21 units. At the time of the purchase, Village now operates 68 coaches and employees nearly 180 people. 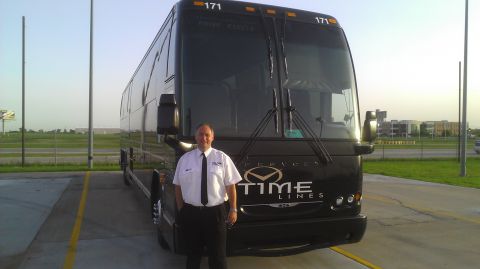 Village continues to experience growth with the purchase of Time Lines, LLC. Village adds 20 units to its fleet with the acquistion and approximately 40 new employees. Village now operates 48 motorcoaches in its fleet.

Village acquires Salina Charter Coach and All-American Tours out of Hays, KS. At least three motorcoaches will be permanently stationed at the Salina branch. New customers along I-70 will be serviced out of this facility. 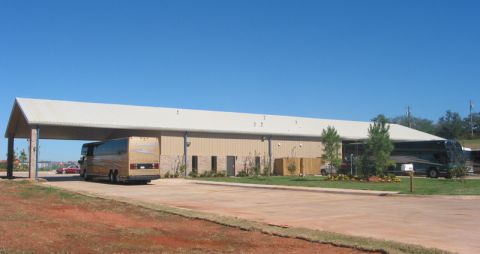 Village makes shop improvements for the Wichita and Oklahoma City locations. Village has a state-of-the-art maintenance facility and boasts full-time mechanics who are committed to keeping its motorcoaches in excellent condition. 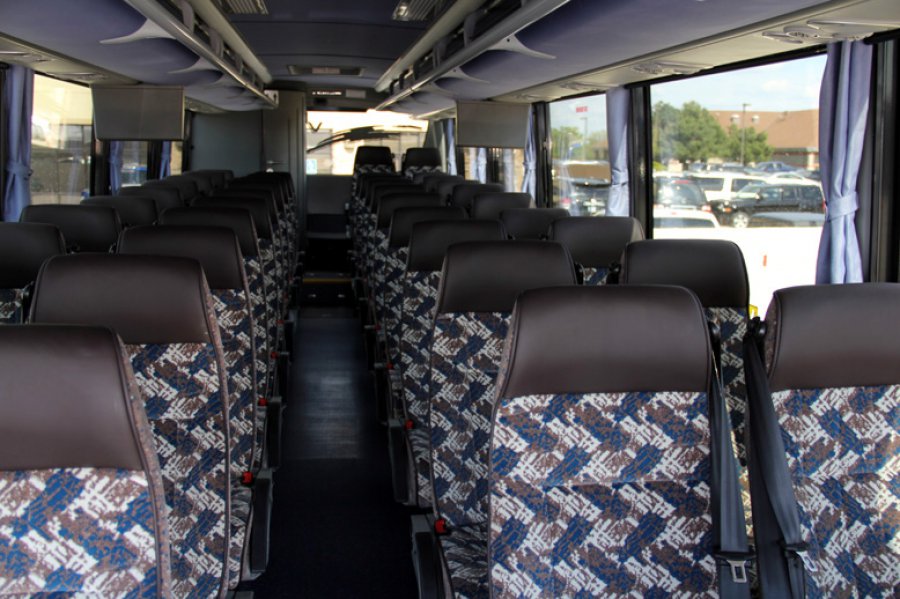 Village introduces a new category of charter coach. The “Economy Class” features coaches that are between 10-15 years of age within the fleet. While still great transportation, these don’t offer the extra amenities of 110-volt plug-ins, wireless internet or satellite television that are now available on our “Deluxe Class” of transportation. 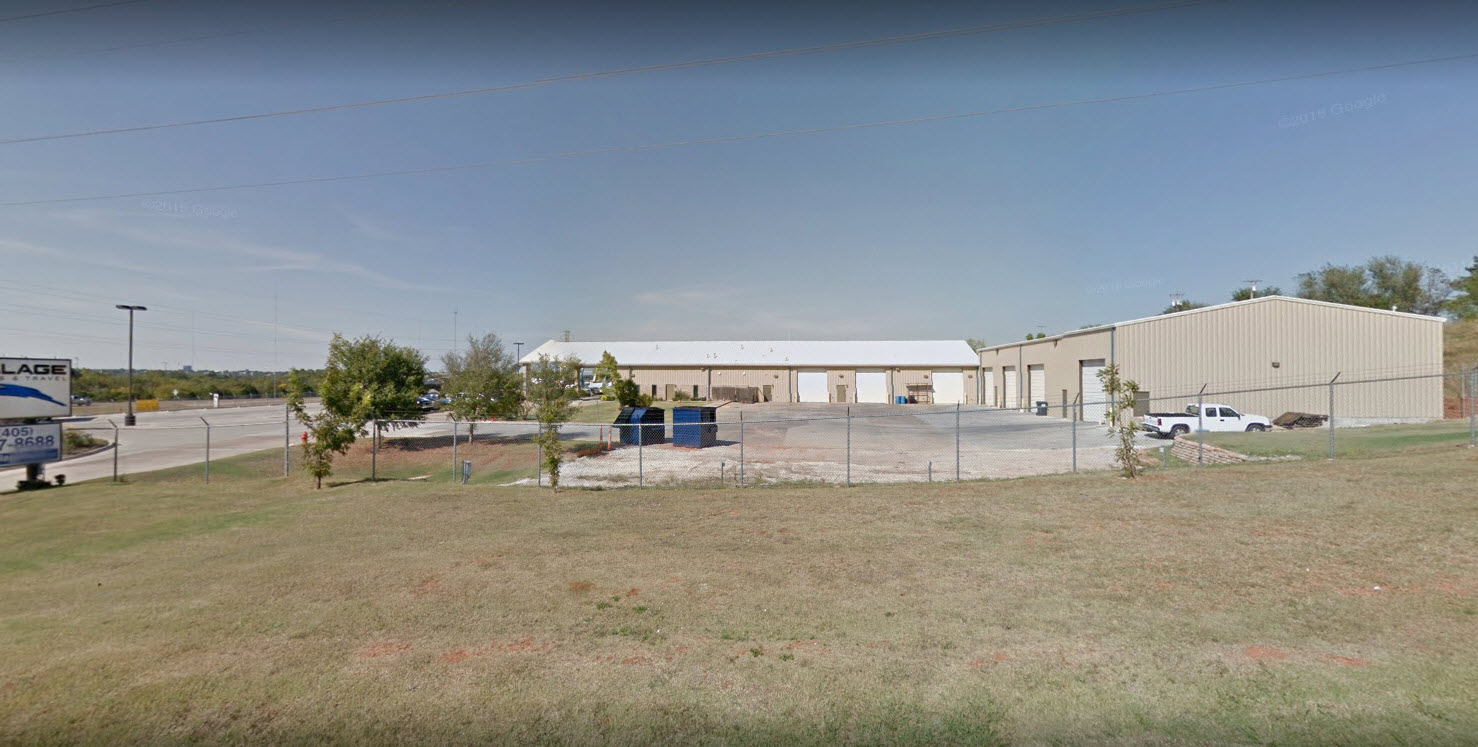 Village celebrates the opening of a new facility in Oklahoma City. Conveniently located at the intersection of I-35 and N.E. 50th Street, the new facility features a large customer parking lot, maintenance facility and offices. 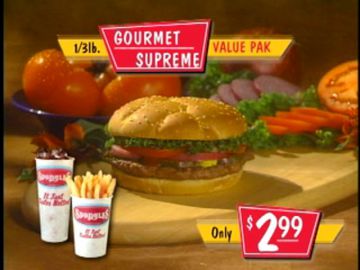 Village and Spangles Team Up

Village and Spangles, a Wichita based restaurant, team up to produce a TV ad. The ad was shown on over 130 stations for over a month. 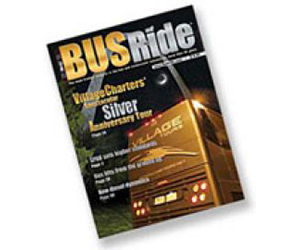 Village celebrates its 25th anniversary with a tour to Branson and St. Louis. Over 560 people, filling 13 coaches, come along on a trip that included a show, riverboat cruise, and private railcars. The event was featured on the front cover of two major trade publications, Bus Ride and National Bus Trader. 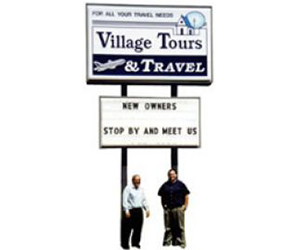 Village Charters is sold to Norman and Jeff Arensdorf. No major operational changes are made by the new ownership.

Village adds its first Prevost to the fleet. The newly designed H3-45 is the first coach in the Village fleet not to be painted blue and white. A new “splash” logo is now present on the coach. 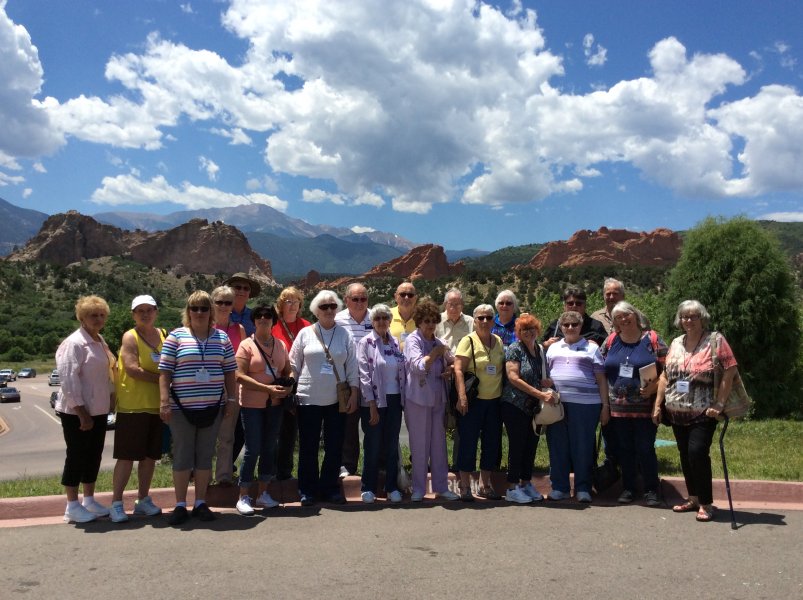 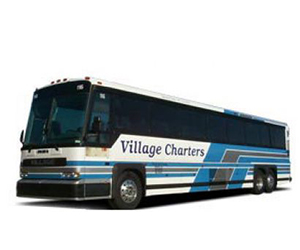 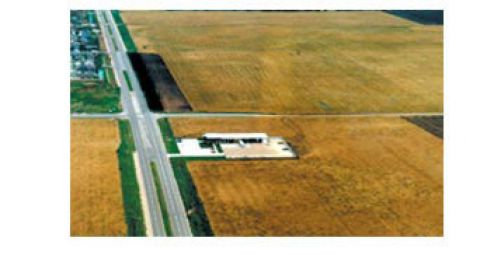 Village builds new facilities in the middle of an empty Kansas wheatfield near the corner of 21st and Tyler. 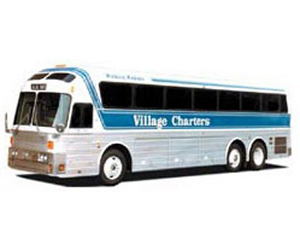 Village Charters is incorporated. A new Eagle motorcoach is purchased and is dispatched to Denver to transport snow skiers from the airport to the ski slopes. Village operates in Colorado under the name Alpine Village Tours.