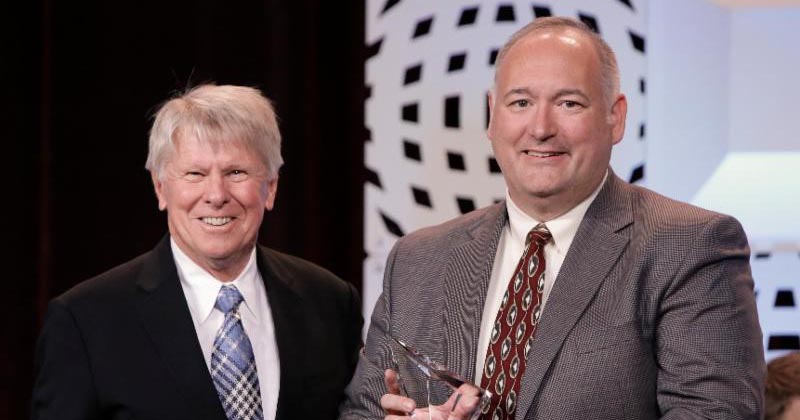 (Alexandria, VA) Village Travel, one of the largest charter coach and tour companies in the Midwest, was honored by its industry peers with the United Motorcoach Association’s Vision Award for large fleet operators, March 1, in St. Louis, at the organization’s annual convention, the Motorcoach Expo. The vision award is the association’s highest honor and there are two winners each year, one for a fleet of 15 or more motorcoaches and one for companies with fleets of 14 or fewer vehicles.

The winner is chosen by a panel of judges from across the industry. Accepting on behalf of Village Travel was Jeff Arensdorf, President and Co-Owner of the company. “We’ve got such a great staff. Everybody talks about that and it’s so important. It’s all about the people,” Arensdorf said, after recognizing the critical contributions of his father and business partner and the support of his wife.

“The Vision Award was designed to reward the best in the motorcoach industry,” said Dale Krapf, Chairman of UMA and of Krapf’s Coaches. “It recognizes companies with new standards of performance that raise the bar in all areas: marketing, maintenance, operations, and safety. In short, these companies give us a target to aim for; a higher standard to measure ourselves against.”

Village Travel was founded in Wichita, Kansas, in 1980 and currently has locations in Wichita (KS), Salina (KS), Oklahoma City (OK), Tulsa (OK), Ft. Smith (AR) and Springdale (AR). Village currently operates a fleet of 92 coaches and employs over 250 people across the six locations. In addition to their charter coach fleet, Village plans and operates over 200 tours across the country annually. To learn more, visit www.villagetours.net or contact Jeff Arensdorf at 316-721-4455

The UMA Motorcoach Expo is the largest gathering of motorcoach operators in North America, bringing together nearly 2,000 bus and motorcoach industry professionals annually. In addition to the annual awards ceremony, the event includes a driver competition, multiple networking opportunities, a sold-out exhibit hall featuring the latest products and service, and an educational program designed to address all bus and motorcoach business operations. Complete details about the UMA Motorcoach Expo are available online.

About the United MotorCoach Association (UMA)

The United Motorcoach Association is the nation’s largest organization exclusively protecting and promoting the interests and welfare of privately owned bus and motorcoach companies. Members include motorcoach owners and industry suppliers. To learn more about UMA go to their website.