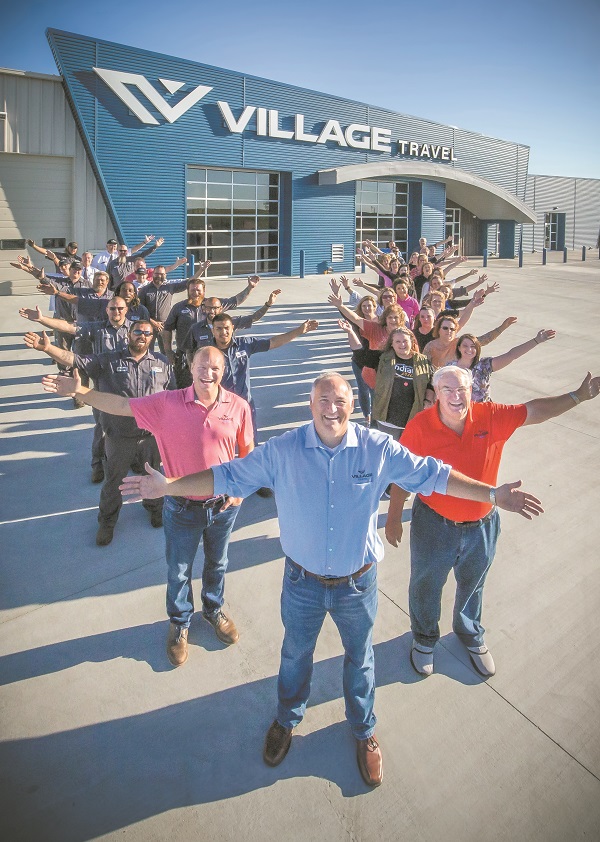 “That’s what gets good results,” he said. “Also, I’m not risk averse, and I’ll take one if it looks healthy to me.”

Although the actual 40-year-anniversary celebrations for Village Travel won’t take place until next year, the Wichita-based company has already marked the occasion with major changes. A new name, a fresh logo and a state-of-the-art corporate headquarters building contribute to the rebranding of this bus and motorcoach company.

How Village Travel got its start

The company began in 1980 as a snow ski tour company called Alpine Village Tours. Soon the owner discovered there were not enough buses running from Denver to the ski slopes to accommodate his guests. So, he bought his own bus.

Then, when the Kansas City Royals were a hot commodity, Village began offering Royals Major League Baseball packages for guests. That helped spur the business to grow by one bus a year.

In 2000 Jeff Arensdorf and his dad bought the company because the previous owner chose to focus on a new business. From the single coach it operated in 1981, Village has expanded to a fleet of more than 130.

Not everything has run smoothly over those 40 years.

“The September 11 attacks took the wind out of our sails and the entire tour business suffered for a few years after that,” said Arensdorf. “The recession also slowed our growth, required hard decisions, and we had to tighten the purse strings.

“We are aggressive, tenacious and we fight for what we believe is best for our company and for our customers,” Arensdorf said.

A key to making it through the tough times has been a staff that keeps its promises.

“We get compliments for doing what we say we will do,” explained Arensdorf. “We also get our passengers to their destinations and back again safely.”