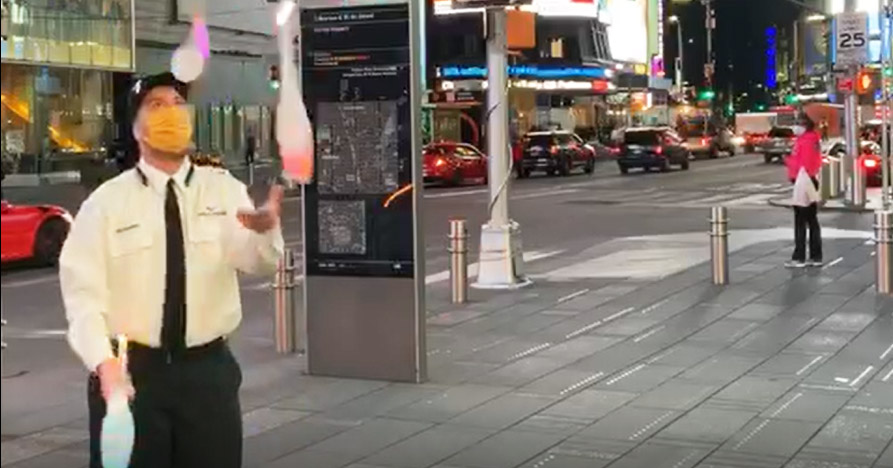 FROM SALINA JOURNAL IN SALINA, KS

Richard Holmgren, well known for his Flying Debris comedy and juggling shows, took his act to Broadway every morning and night for nearly 3 months, as a bus driver for nurses during the height of the COVID-19 crisis.

“They poured their heart and soul into it under stressful conditions,” said Holmgren, who is back home in Salina, where he completed a 14-day quarantine. “They worked 84 hours a week. They were exhausted when they got back on the bus and there was no hiding it.”

Holmgren was in Baltimore driving a bus of Fort Hays State students when the pandemic brought the country to a halt. He drove them back to Kansas and his employer at Village Travel called to say he had a possible job for Richard. That was good news, because during the pandemic his juggling shows and bus tours would be shut down.

The job was in New York transporting medical staff from around the country from hotels to hospitals and back. It was supposed to last three weeks to 45 days. Holmgren started April 1 and came home June 17. They must have liked his humor. Did they know he was a performer?

“They did,” admitted Holmgren, who juggles bowling balls and machetes, as part of his act. “I joke a lot. I brought my basketball and did some spinning, did some juggling, did all the tricks my mom said I would never need.”

On the Flying Debris Facebook page, there is a thank-you card from one of the Coney Island crew.

“Richard, you were so much more than our driver. You made us laugh when we had reasons to cry. Thank you for being a friend and a fantastic human being. You are an unforgettable part of our Coney crew and we love you. We were lucky to have you! Thank you!”

“I really had a good time with them all. They were fun to joke with,” said Holmgren, who has been performing since 1994.

Holmgren never felt he was part of history while he was in the pandemic epicenter that the world was watching on the news each day. And, he was a floater, so he went to all of the boroughs and many different hospitals. And, he experienced a different New York.

’I drove through a well-lit, but empty, Times Square four times a day,” Richard remembered. “Every evening at 7 p.m., there were the sounds of appreciation, people banging pots and pans, applause, singing, police and fire sirens.”